Richard Stark's Parker: The Hunter by Darwyn Cooke
My rating: 4 of 5 stars

Different and far darker than I expected--though I didn't really know what to expect. The noir artwork and themes drew me too it (and the guy at the comic book store highly recommended it). I hadn't even heard of the original novels by Richard Stark.

Parker is the protagonist - but he's certainly no hero. He does, though, have that inner code that noir protagonists have. He's a completely self-sufficient and supremely competently man. You do not want to cross this guy--as he is makes crystal clear in the course of the book. As Spenser said of Hawk: "He's not a good man, but he's good."

I haven't read many graphic novels, so I don't have much to compare this to. But the art fit the story very well. It helped set the mood and tone.

Live by Night by Dennis Lehane
My rating: 5 of 5 stars

I had this book on my shelf for a bit but when I saw it was being made into a movie, I decided it was time to read it. It's a great book; Lehane at the top of his game. It should make a great movie.

It's precursor The Given Day was really good, but was a bit unwieldy. There were too many story lines going at once. Live by Night is much more focused on just Joe Coughlin's life. This allowed the reader to get much more inside of Joe's life than Danny's and the other characters from The Given Day. We get a much more introspective novel.

It didn't strike me until reading this how existential Lehane's novels are. All of his novels seem to be about characters thrown into a violent and absurd world, facing hard choices, trying to make the best of their lives. Nevertheless, Lehane's characters are far more constrained by their past and their environments than a Sartrean Existentialist would have them (radical freedom and all). This is evident with Coughlin as well--and in part is one of themes of the book: one's past will catch up to you and reaps its 'rewards.'

The one thing I am still not sure about is the ending. I won't spoil it, but it didn't sit quite right with me. That said, I am not sure any other ending would have been better. 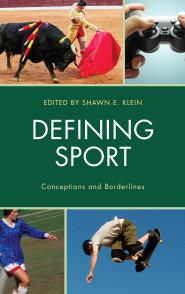 I'm proud to announce the publication of my newest book: Defining Sport: Conceptions and Borderlines.

This is the first book in Lexington Books series: Studies in Philosophy of Sport. (FYI: let me know if you have an idea for a book in this series.)

More information on the book here.