That whole why do they hate us debate

One of the areas where I diverge with many (non-Objectivist-type) libertarians is over foreign policy. I surprisingly find myself often at odds with CATO, a think tank with which I often agree, on this issue. I don’t care for the term interventionist--that’s not an accurate term for how I view a rational and justifiable foreign policy--nonetheless, I am certainly not a non-interventionist or isolationist. I believe there are many cases beyond some immediate and direct threat situated at one’s geographical borders that justify military and diplomatic activity. Anyway, this post isn’t about how to define those cases. I just wanted to preface my comments below.

One of the central themes of those coming from the non-interventionist position is that Arab/Muslim anti-Americanism is primarily the result of American foreign policy and not deep cultural and value differences. Patrick Basham, a CATO adjunct scholar, purports to prove this with some recent polling data. (Why Muslims Still Hate Us)

I am no position to dispute this data (though I think one should always take polls and surveys with very large salt licks); however, I think Basham runs with the data in a misleading way.

First, why only post-9/11 polls? The Muslim hatred of the West (including America) goes back well before 2001, indeed it seems well before any significant American involvement in the Middle East. For example, the Muslim Brotherhood, one of the leading anti-Western ideological movements, was founded in the 1920s.

This is a point that the non-interventionists tend to ignore. If Muslim hatred of the US is based primarily on our foreign policy, why was their antipathy prior to any serious, prolonged military or diplomatic forays into the Middle East? A better way to state this might be: why were ideological and religious movements that were anti-West so popular?

Second, the fact that polls show, generally, positive attitudes towards many facets of American culture (movies, TV, scientific progress) doesn’t demonstrate that antipathy for the US is not based on a deep cultural and value differences.

Anecdotally, I’ve had too many arguments with anti-American types in Levis and Nikes to think that people don’t compartmentalize these things. People are quite capable of liking the products of American culture without liking the values and principles that make those products possible. That’s all this particular polling data appears to show: Muslims/Arabs enjoy many of the products of American culture. It doesn’t say anything about their points of view on the kinds of values and principles that underlie that culture: namely, individualism and the primacy of reason.

The Cheetahs are doing it! 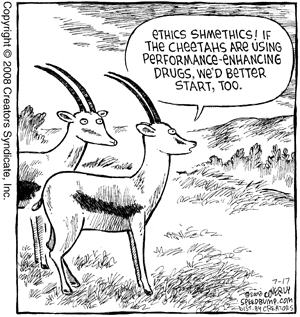 First there was Bullshit, now Mindfucking.

Mindfucking: A Critique of Mental Manipulation
By Colin McGinn

Actually, looks interesting and McGinn is usually a relatively clear writer, so it's been added to my wishlist.
Posted by Shawn Klein at 7/16/2008 04:19:00 PM 4 comments: Links to this post

Starring: Neal Patrick Harris, Nathan Fillion, and Felicia Day. Produced by Joss Whedon.
Posted by Shawn Klein at 7/16/2008 10:15:00 AM No comments: Links to this post

Though I am not teaching it this fall, here's the video for Business and Economics Ethics:

Here's the promotional video for the debut of PHI 276: Sports Ethics.

Developed by Rockford College's Center for Ethics and Entrepreneurship, the next few posts are promotional videos for my fall courses. Here's the first one, for RC's PHI 103: Introduction to Philosophy: