My Book: Steve Jobs and Philosophy 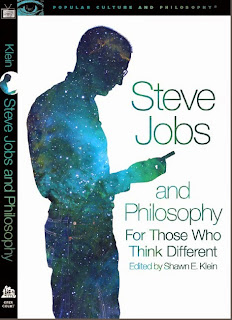 My new book is Steve Jobs and Philosophy: For Those Who Think Different. It is the latest volume (#89) in Open Court's Pop Culture and Philosophy series.

You can order on Amazon.com and Barnes and Noble.
Kindle

and Nook versions are also available.

You can read the Preface

Table of Contents:
I. The Crazy One
1. The Reality Distortion Field of Steve Jobs by James Edwin Mahon
2. Counter-Culture Capitalist by Carrie-Ann Biondi
3. The Anti-Social Creator by Terry W. Noel
4. What Pixar Taught Millennials about Personhood by Kyle Munkittrick

II. The Troublemaker
5. How Can We Make Entrepreneurs by Stephen R. C. Hicks
6. The Visionary Entrepreneur by Robert F. Salvino
7. But Steve Jobs Didn't Invent Anything! by Ryan Krause and Owen Parker
8. What Does Market Success Show? by William R Thomas

III. The Rebel
9. Marley and Steve by Jason Walker
10. The Noble Truths of Steve Jobs by Shawn E. Klein and Danielle Fundora
11. Two Sides of Think Different by Robert White
12. The Moral Perfectionist by Jared Meyer
13. Does Apple Know Right from Wrong by Jason Iuliano

IV. The Misfit
14. Close Your Eyes, Hold Your Breath, Jump In by Paul Pardi
15. Does Steve Jobs Live and Work for You? by Alexander R. Cohen
16. Jobs and Heidegger Square Off on Technology by Christopher Ketcham
17. Simplicity is the Ultimate Sophistication by Dennis Knepp

What's being said about the book:

“Jobs’s innovations have inspired the innovative reflections about him in this fascinating and insightful volume.”

“The provocative chapters in this book probe Steve Jobs’s life and work, examining their impact on our daily lives and beyond.  The result is an awesome contribution to our understanding of one of the world’s greatest innovators.”

“Every fan of Steve Jobs will find something to chew on in this rich collection of new essays exploring his work and life from a philosophical point of view.”

—Tom Morris, author of Philosophy for Dummies and If Aristotle Ran General Motors

“Steve Jobs may not be the genius some people think he is.  But he has changed how we learn, what we learn, and how we communicate. Not bad for a kid who started his career in his parents’ garage!”

“We’re surrounded by high tech, to our considerable advantage.  If we want to understand something about what it all means without necessarily becoming a geek, this user-friendly book is a good place to start.”

—Tibor Machan, author of A Primer on Business Ethics

“Steve Jobs is a classic American entrepreneur. When you connect the dots and grasp Jobs’s fundamental entrepreneurial philosophy, you will see why government regulations and bureaucrats are the enemy of innovation and true human flourishing.”

“Not only a thoughtful philosophical consideration of Jobs’s life and work but a delightfully entertaining one too!”

"What is creativity?  What does it mean to be an entrepreneur?  What philosophical lessons can we learn from studying disparate business models?   In this volume, philosopher Shawn Klein has assembled a variety of essays which illuminate these themes by way of examining the legendary computer mogul  Steve Jobs.  Whether you’re an Apple person or not, you’ll find these essays to be accessible and insightful."